L.O.V.E. inspires to become the best version of yourself.

The Latinas On the Verge of Excellence - L.O.V.E. Mentoring Program supports and empowers young Latinas to strive for success, both in school and in life, through health interventions targeted at mental, reproductive and physical health as well as career readiness and mentorship.

L.O.V.E. aims to provide young Latinas a gateway to lifetime health and success by providing targeted support in the areas of physical, mental and reproductive health in addition to career readiness and mentorship.

L.O.V.E. is a curriculum-based program with a main focus on the promotion of health, particularly physical, mental and reproductive health as well as career readiness through mentorship.

L.O.V.E. was devised to address the specific challenges that face adolescent Latinas in New York City. Issues with self-esteem, mental health and school retention harshly affect young Latinas, their development into women and their larger Hispanic community at greater rates than other racial or ethnic groups. By creating an environment focused on mentoring support and empowerment, L.O.V.E. intends to impact education by contributing to increased high school graduation rates, college enrollment, and healthy lifestyles among young Latinas.

L.O.V.E empowers young Latinas to make positive life choices that enable them to maximize their full potential. The mentoring program recruits female university students to support, guide, and be a role model to a young Latina for a period of a school year. By becoming part of the young Latina’s life, the mentor serves as a guide to help her achieve her academic and personal goals.

The Benefits of the Mentoring Program

L.O.V.E. is unique because it maximizes the mentors and mentees proximity in age to facilitate association, comfort and trust. The mentee can more easily connect with the mentor and picture herself following in the mentor’s footsteps. The L.O.V.E. meetings provide a safe space for young Latinas to strengthen their skills and build self-confidence through positive reinforcement, consistency and understanding.

Mentees are given crucial academic support, including guidance for successful learning as well as a special focus on college readiness. L.O.V.E.’s teeming distribution of information regarding college and academics, its supporting encouragement of any pursuits helps young Latinas overcome, believe, and succeed.

Mentors receive the satisfaction in helping young Latinas achieve their educational and personal goals. The mentors inspire, motivate, and guide the mentees to strive for a successful future. Mentors also help raise levels of self-esteem, self-efficacy, and self-confidence, thereby raising academic achievements and quality of life.

L.O.V.E. is a curriculum-based program that consists of three core components: personal empowerment, study skills, and college access. Each session has its own focus area and theme. Each mentoring session is a collective gathering of mentors and mentees, where participants engage in both group activities and one-to-one interactions, guided by a workshop.

L.O.V.E.'s mission is to support and empower young Latinas by giving them the skills to achieve their educational, personal, and future professional goals. The mentoring relationship offers a powerful opportunity for both mentor and mentee to learn and grow. In order to take full advantage of the benefits a mentoring relationship can offer mentors and mentees should consider the following: 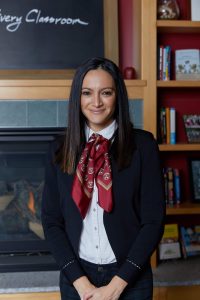 During her last years of school at CUNY, Ms. Espinosa began working in the nonprofit sector. Before graduating, she spent a year abroad at the University of Paris studying French. Upon her return to New York she began to work for the suicide prevention program, Life is Precious, where she had the opportunity to counsel Latina adolescents who suffered from depression and suicidal ideations.

During the course of her service work she became more aware of the inequalities that marginalized populations, such as immigrants and women, faced every day in the United States and around the world. Her wish to empower others led her to learn about amazing organizations that work to protect and defend human rights. Her experiences in the nonprofit sector helped her understand the disadvantages that her community experiences everyday and gave her the opportunity to create changes that can help Latino families live more positive lives. In 2010, Ms. Espinosa decided to pursue a second degree in public service to further support her community.

Ms. Espinosa currently devotes her time to her very own brainchild, the Latinas On the Verge of Excellence L.O.V.E. Mentoring Program. She created this program with the goal to support and empower young Latinas to strive in school, and ultimately increase high school graduation rates, college enrollment, and healthy lives among young Latinas. Ms. Espinosa is constantly striving to set new standards of personal, professional, and academic excellence, while never forgetting to honor her Latin roots and giving back to her community. She has always believed in justice and fairness, and that love and compassion need to be part of the practice of justice.